This page is for historical reference, for current information on Meetings, please visit the Meetings page.

Available position papers are listed below.  Click the date to open the PDF document. 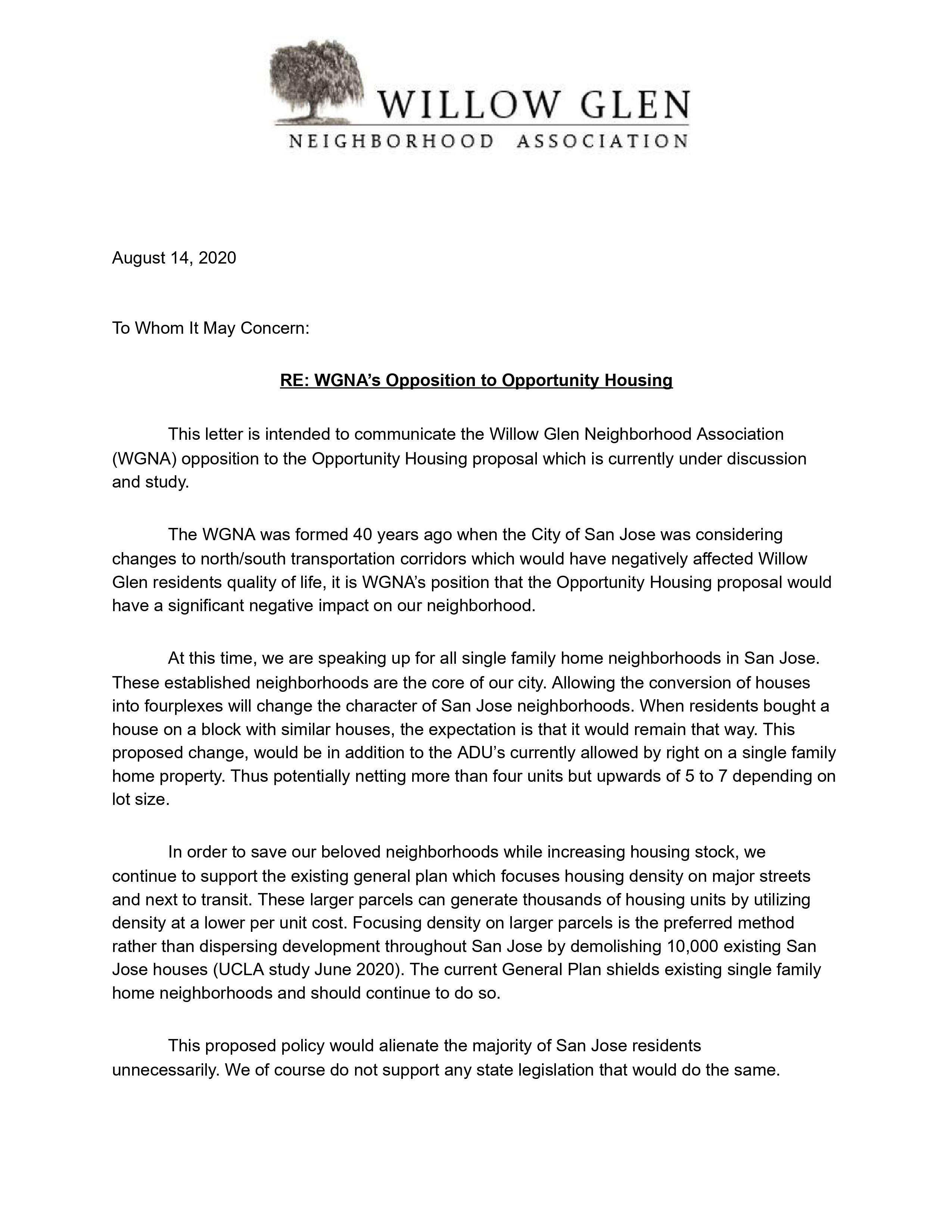 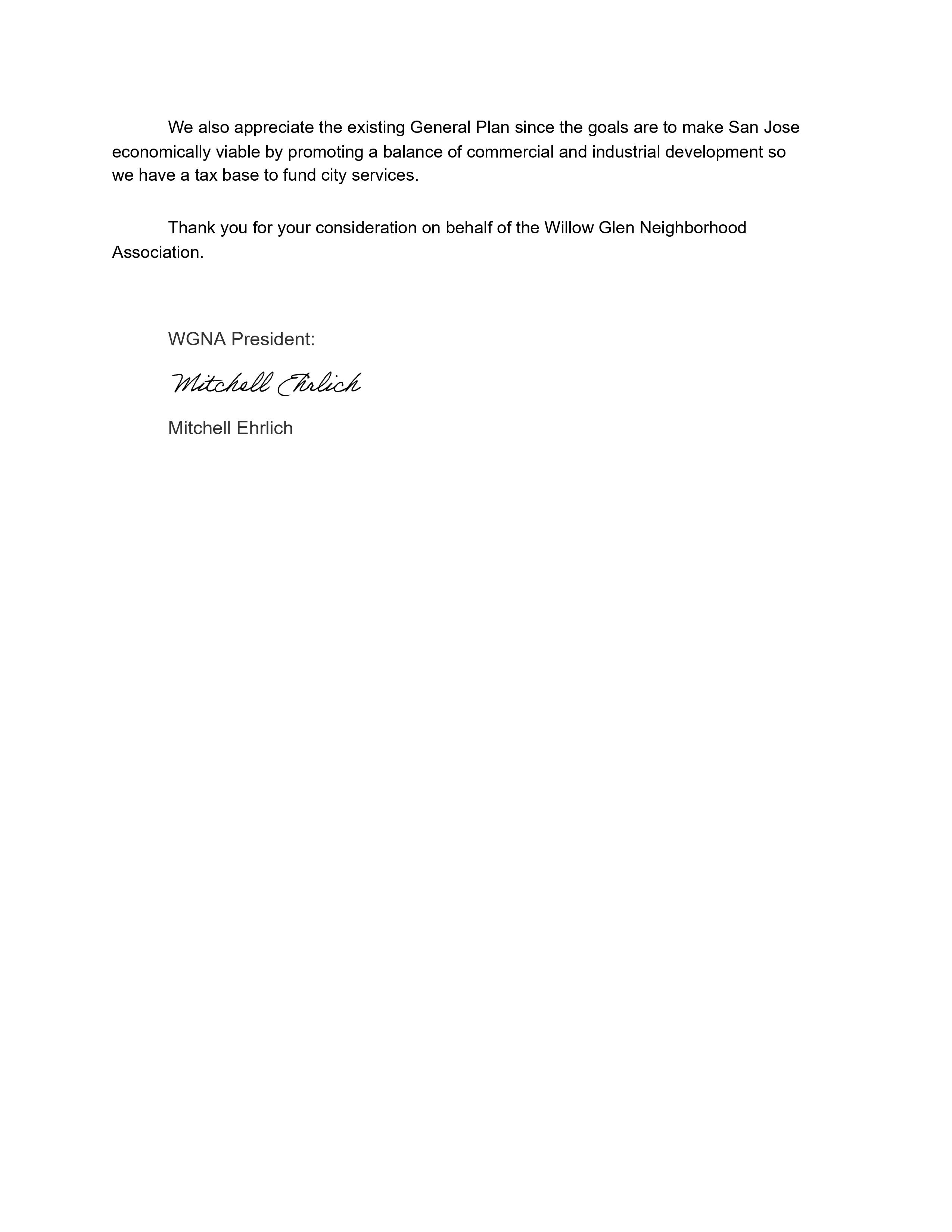 OUR POSITION: The Willow Glen Neighborhood Association (WGNA) strongly urges the Santa Clara Valley Water District (SCVWD) to deny the requested permit and the use of this site for Hope Village or any similar homeless transitional housing projects.

2018, October 11, re. Google Campus proposal & Diridon Station Area Plan — supports a position on the topic of the Diridon Station Area Plan and Google, the Silicon Valley technology company that intends to develop a major transit-oriented campus in the core of the city, expanding the present-day downtown San José.   This potential mixed-use master plan development includes offices, residences, retail shops, restaurants and open spaces, and it's estimated that Google will employ 15,000 to 20,000 people.  On September 13, 2018 [see news], the company visited with the City of San José in the Willow Glen neighborhood to tell us more about its plans, and how that fits in with the City of San José's Diridon Station Area projects.  The WGNA position paper was endorsed by the WGNA Board and reads in part:

The Willow Glen Neighborhood Association (WGNA) would like to offer our support and endorsement for the Google Village project in the Diridon Station area in San Jose. As you may know, WGNA – the oldest neighborhood association in San Jose celebrated 45th anniversary in 2018 -- was established for the sole purpose of creating a stronger and more tightly-knit neighborhood. Our Board of Directors is comprised of established professionals with expertise in various fields, including, but not limited to, public safety, education, land development, small business and many more, with the ultimate goal to keep residents informed on a range of topics pertinent to the life in Willow Glen and to act as an agent of positive change by getting involved in advocacy activities on behalf of our members.

2018, June 14, re. Charities Housing at Page Street — supports a position for the proposed affordable residential housing development by Charities Housing; City of San Jose File No. SP17-037.  Location: 329-353 Page Street, in the West San Carlos Urban Village Planning Area nearby Willow Glen.  The WGNA position paper was endorsed by the WGNA Board and reads in part:

After two meetings and presentations in May and June of 2018, the overwhelming majority of the WGNA Board of Directors are fully satisfied with the answerability displayed by Sandra Heredia, Executive Director, and Kathy Robinson, Director of Housing Development, both of them representing the applicant, Charities Housing Development Corp. We urge the city to approve the Charities Housing project, file no. SP17-037.

2018, June 14, re. Mobiltie Antenna  — regards a City of San Jose Special Use Permit to allow the installation of a new 60-foot Wireless Communication Antenna Slimline Monopole within a new 6-foot block wall compound along the perimeter landscaping on a 0.45 gross acre site. The project location/address is at the northeast corner of Prevost Street, and Jerome Street, San Jose.  The Applicant is Mobilitie, based in San Juan Capistrano, CA.  The city's project Reference Number is SP17-044; and number 2017 039775 DV.  The WGNA position paper was endorsed by the WGNA Board and reads in part:

Mobilitie LLC proposes a cell tower installation for T-Mobile in a site 80 feet from the nearest residential property line. This will affect Gardner neighborhood residents, even if they are not directly benefiting from the wireless service....

2018, May 16 — supports a “NO on B” position, referencing San Jose Ballot Measure B, a.k.a. Evergreen Senior Homes.  The measure is on the ballot for the June 5, 2018, Statewide Direct Primary Election.  As listed by Santa Clara County, referencing the local measures, and per the official ballot entry, the City of San Jose Measure B (Ordinance and General Plan Amendment Majority Vote) reads as follows:

2018, January 26 — this is a letter of request to "Improve Public Safety for primary school children attending Gardner Academy School on Illinois Avenue at Auzerais Avenue. Two major intersections along a California State Roadway — Bird Avenue — are unsafe crossings. First, there is Auzerais at Bird Avenue; and secondly, Virginia Street at Bird Avenue.

2017, July 20 — regards "Affordable Teacher Housing", an item that is expected to be on the San Jose City Council Agenda for Tuesday, August 8, 2017.  It was previously discussed and voted on as item #GP17-005 from the San Jose Planning Commission Agenda for Wednesday, May 24, 2017 (Section 6a., General Plan Hearing Continued from May 10, 2017, "General Plan Amendment request to change the Land Use Designation...").

2015, July 13 — [Invalidated as of the June 2016 Board Meeting] regards "Letter in Support of the Lincoln Avenue Road Diet Trial", addressed to Jim Ortbal, Interim Director of Transportation, City of San Jose., and copied to Mayor Liccardo and Members of the City Council.