The Hope Village Relocation to Willow & Lelong Streets was defeated on Monday 18 March 2019.
In a meeting at Gardner Community Center that evening (7:00 PM), Councilmember Dev Davis and Mayor Liccardo announced that a decision at the Santa Clara Valley Water District (SCVWD) earlier that afternoon (3:00 PM) would prevent the use of this site for a homeless encampment.  The relocation project had also received tremendous disapproval by area residents and stakeholders.

Subsequent meetings on the topic of the Hope Village Relocation to Willow Glen have since been canceled.

OUR POSITION: The Willow Glen Neighborhood Association (WGNA) strongly urges the Santa Clara Valley Water District (SCVWD) to deny the requested permit and the use of this site for Hope Village or any similar homeless transitional housing projects. 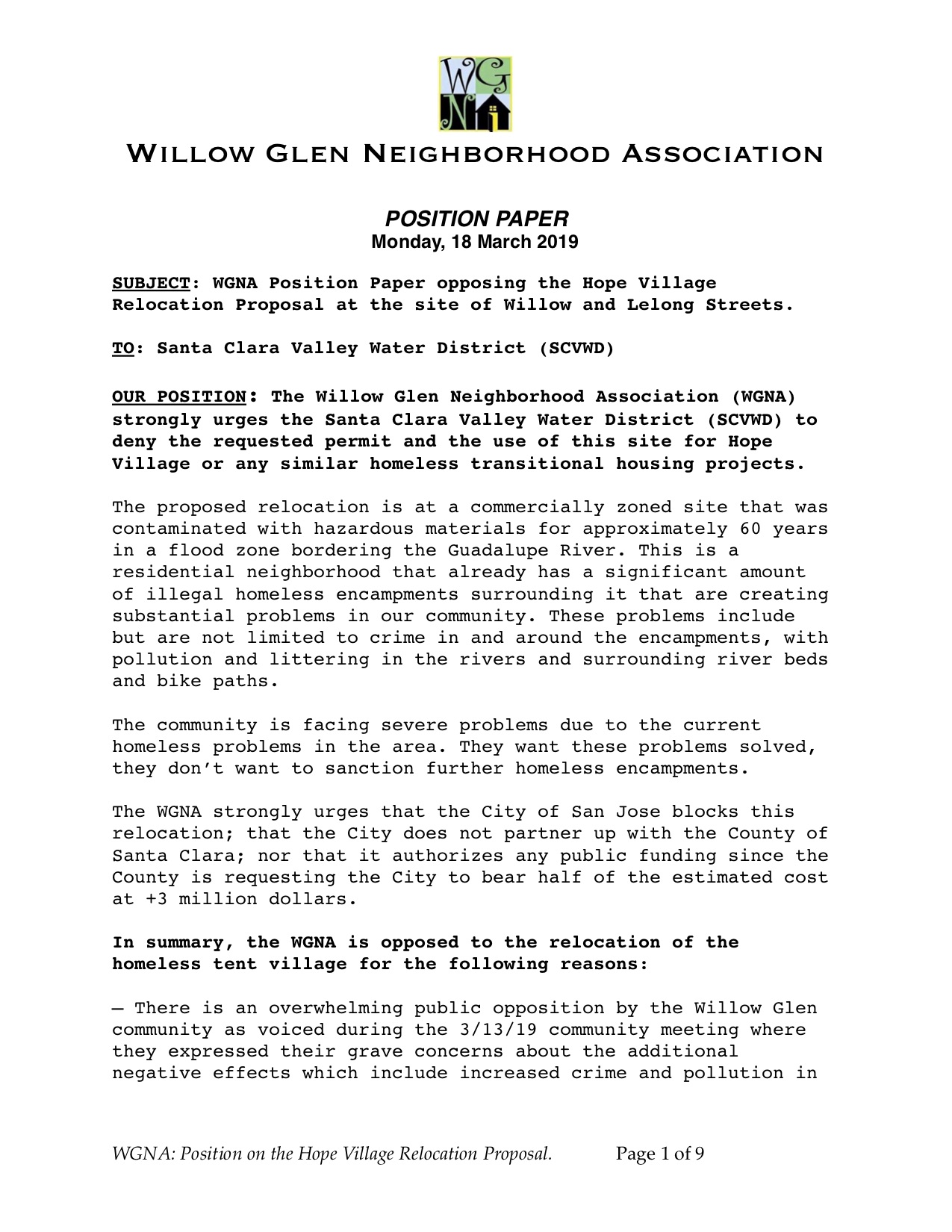 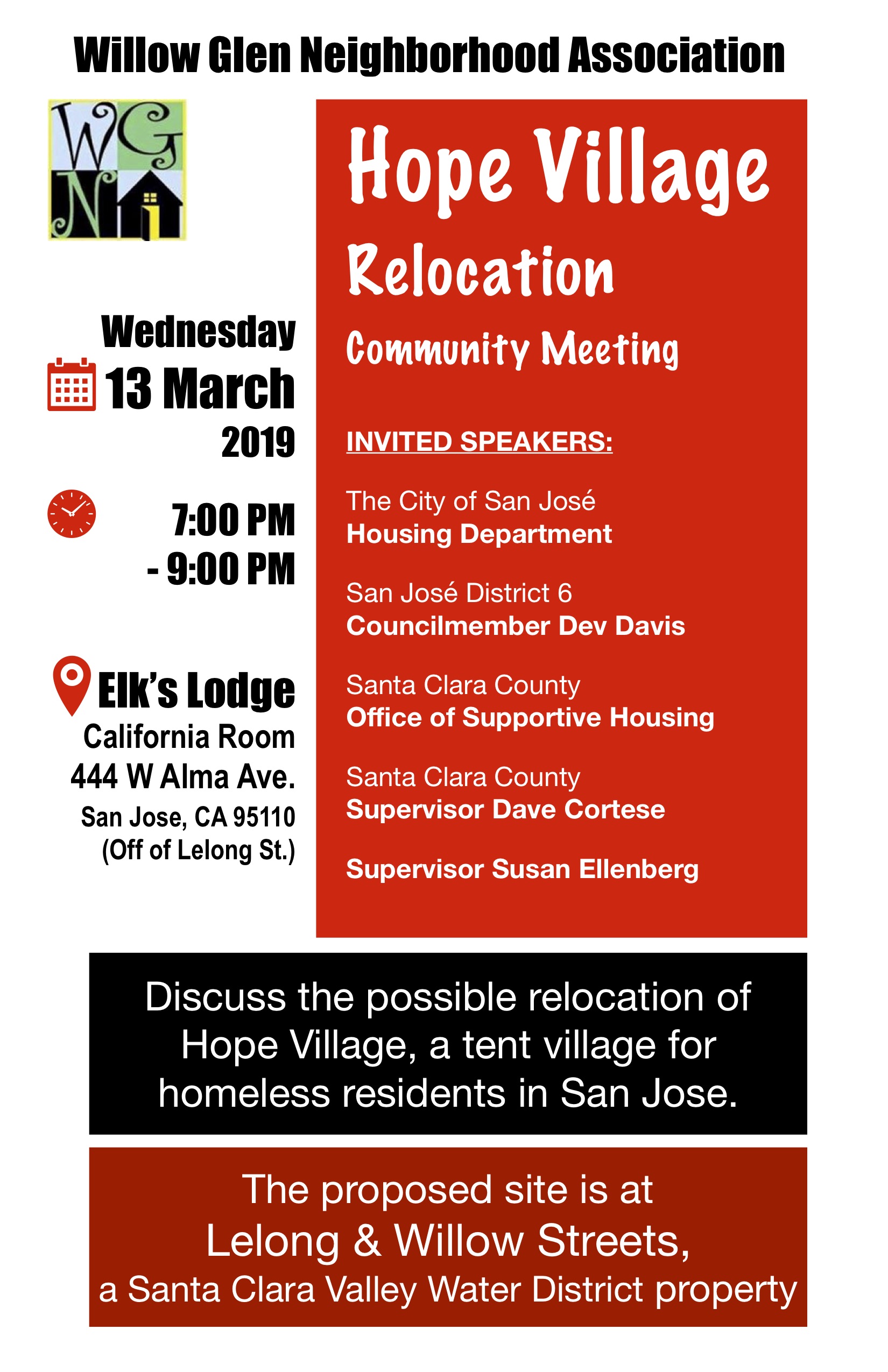 The night's meeting on Wednesday 13 March was hosted by Willow Glen Neighborhood Association - WGNA at the Elk's lodge.  The WGNA board members have since heard many of the concerns of the area residents and stakeholders and published a position paper to the Santa Clara Valley Water District on Monday 18 March 2019.

The last meeting on March 13th was an open house meeting, whereas the city councilmembers, county supervisors, representatives, and departments were invited to attend and speak. The WGNA Board encouraged Councilmember Dev Davis and others from the city of San Jose to participate along with all of the stakeholders in our community in an open house forum.  The city chose not to attend, but the county sent its representatives.

Monday 18th - 7:00 -9:00 p.m., the first Community Meeting by Dev Davis and the city's Housing Department was planned at the Gardner Community Center, 520 W Virginia Street; but because of a determination made earlier at the Santa Clara Valley Water District, this meeting instead announced the defeat of the Hope Village Relocation to Willow & Lelong Streets.  The meeting then ended early.

Also on this date, the community was to hear about the "Homeless Tiny Home Community Coming to Tamien this Summer".  Further discussion on this related topic is yet to be determined. 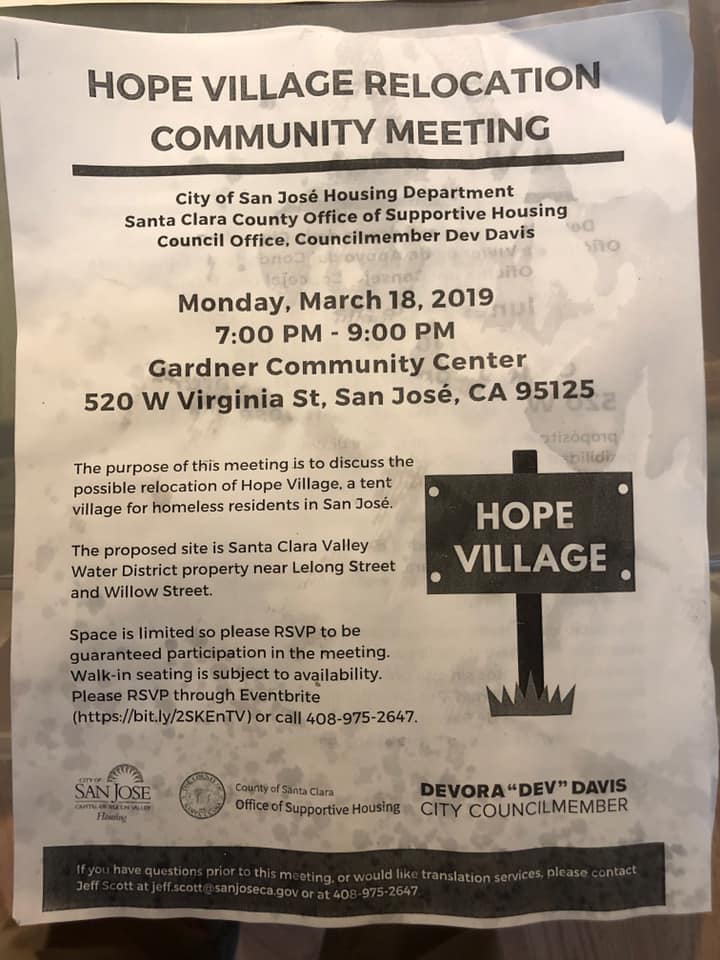 Wednesday 20th (CANCELLED) - 7:00 - 9:00 p.m. Community Meeting / Elks Lodge at 444 W. Alma Avenue (off of Lelong).  Dev Davis and the City’s housing department planned on hosting a second community meeting regarding the relocation of Hope Village, because of the frustration by many residents and stakeholders who were put on the wait list for the meeting on March 18th. 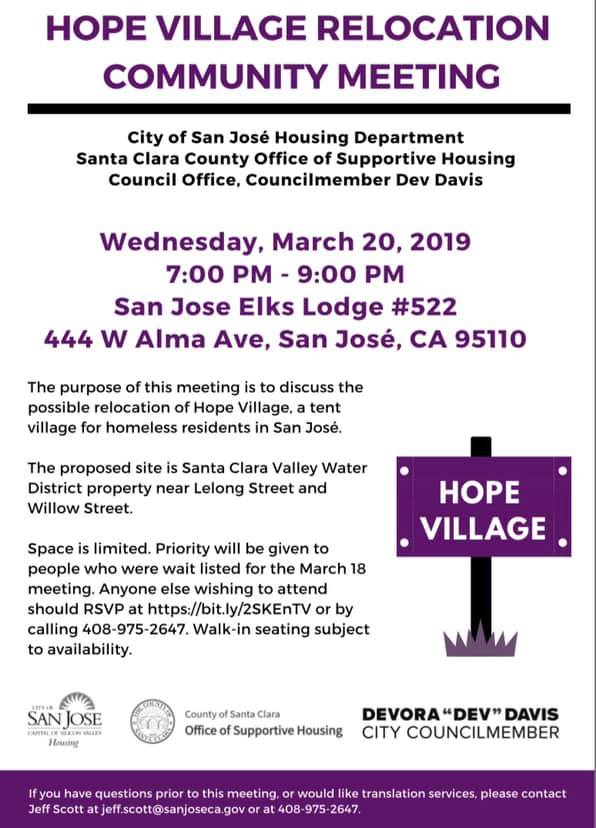 Tuesday 26th - 4 pm City Council Meeting Agenda item 4.5 "Hope Village Update" with Mayor Liccardo and the fellow councilmembers, including Councilmember Dev Davis.  (The meeting begins earlier, but this agenda item is not to be heard before to 4:00 P.M.). See the Agenda at the city's website here.

[Further discussion on this related topic has yet to be determined, and whether or not it will be removed from the agenda, or discussed in a different context].

(a) Accept the staff report on the status of Hope Village; and
(b) Direct staff to return to the City Council with an implementation plan and timeline for a city and county funded development of a new Hope Village.
CEQA: Not a Project, File No. PP17-009, Staff Reports, Assessments, Annual Reports, and Informational Memos that involve no approvals of any City action. (Housing)
NOT TO BE HEARD BEFORE 4:00 P.M.

For more follow-up questions or other matters related to Hope Village and the state of temporary housing for the homeless, please email [email protected] and your message will be forwarded to the WGNA Board.  WGNA has already made its position on the topic; however, beyond the recent determination, we are interested in helping Hope Village and the homeless beyond the difficult predicament.