"No On Measure B", WGNA Position Paper

Willow Glen Neighboroood Association supports a “NO on B” position, referencing San Jose Ballot Measure B, a.k.a. Evergreen Senior Homes.

The measure is on the ballot for the June 5, 2018, Statewide Direct Primary Election.  As listed by Santa Clara County, referencing the local measures, and per the official ballot entry, the City of San Jose Measure B (Ordinance and General Plan Amendment Majority Vote) reads as follows:

See this position paper in PDF format; as well as go to the list of our other position papers at the page, http://www.wgna.net/position_papers 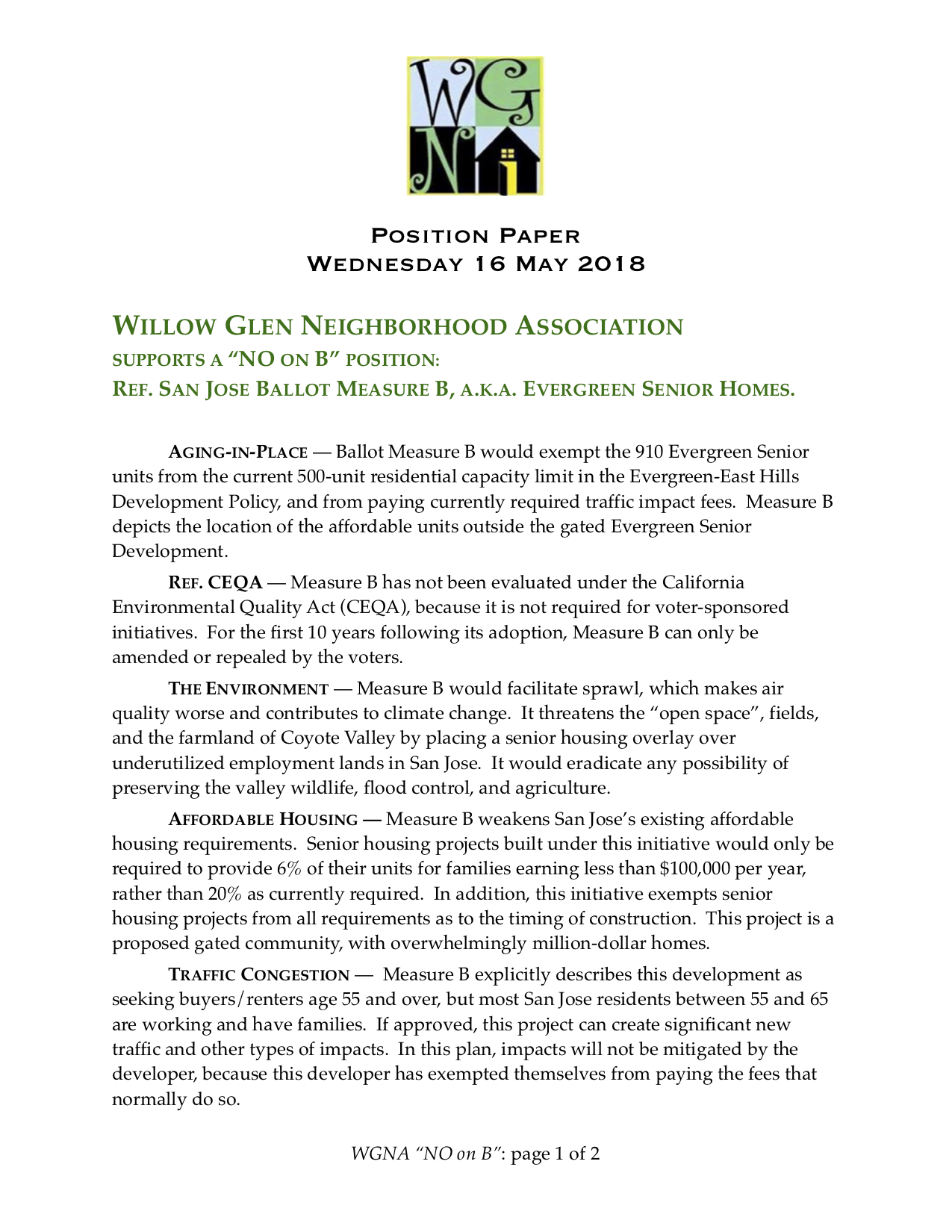 Willow Glen Neighborhood Association
supports a “NO on B” position:
Ref. San Jose Ballot Measure B, a.k.a. Evergreen Senior Homes.

Aging-in-Place — Ballot Measure B would exempt the 910 Evergreen Senior units from the current 500-unit residential capacity limit in the Evergreen-East Hills Development Policy, and from paying currently required traffic impact fees.  Measure B depicts the location of the affordable units outside the gated Evergreen Senior Development.

Ref. CEQA — Measure B has not been evaluated under the California Environmental Quality Act (CEQA), because it is not required for voter-sponsored initiatives.  For the first 10 years following its adoption, Measure B can only be amended or repealed by the voters.

The Environment — Measure B would facilitate sprawl, which makes air quality worse and contributes to climate change.  It threatens the “open space”, fields, and the farmland of Coyote Valley by placing a senior housing overlay over underutilized employment lands in San Jose.  It would eradicate any possibility of preserving the valley wildlife, flood control, and agriculture.

Affordable Housing — Measure B weakens San Jose’s existing affordable housing requirements.  Senior housing projects built under this initiative would only be required to provide 6% of their units for families earning less than $100,000 per year, rather than 20% as currently required.  In addition, this initiative exempts senior housing projects from all requirements as to the timing of construction.  This project is a proposed gated community, with overwhelmingly million-dollar homes.

Traffic Congestion —  Measure B explicitly describes this development as seeking buyers/renters age 55 and over, but most San Jose residents between 55 and 65 are working and have families.  If approved, this project can create significant new traffic and other types of impacts.  In this plan, impacts will not be mitigated by the developer, because this developer has exempted themselves from paying the fees that normally do so.

Strain on Emergency Services — Moreover, Measure B does not take in consideration the additional cost overruns of other city services, including our Police Department (currently understaffed due to budget shortfall) and the need for additional Fire Department, fire suppression, or emergency medical services.

Growth Management & Boundaries — In effect, Measure B casts aside the City of San José’s 2040 General Plan, and it accelerates housing development outside the established residential growth areas (approved by the voters in numerous task force meetings) where there is little existing infrastructure to support traffic, as well as other burdens created by new development.

Detriment to Seniors & Veterans — Developers claim to help veterans with Measure B.  Yet, the actual language of the initiative does not make any requirements or commitments for housing veterans.

Urban Sprawl — Measure B encourages residential growth on the outskirts of the city, resulting in sprawl development.

Lack of Transparency at April 12, 2018, WGNA Board meeting — During the presentation, the representative of Evergreen Senior Homes neglected to present complete information to the members of the WGNA Board, and the Willow Glen residents in attendance.  For example, what was not provided  “Yes on B” is the 367-page document that is referenced as part of Evergreen Senior Homes plan; although, “No on B” presented it for discussion, which is a document that would become binding if Measure B is approved.

President of the Board